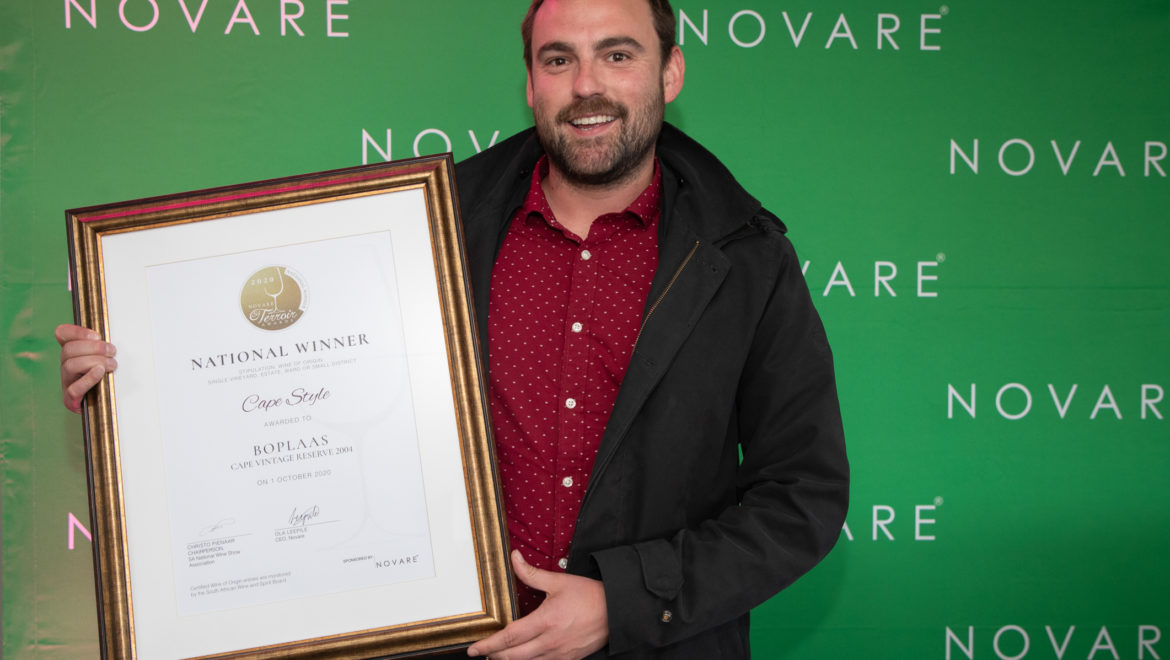 Boplaas Family Vineyards in Calitzdorp achieved victory at the Novare Terroir wine Awards with no less than two of its wines among the winners in this national competition.

The SA Terroir Wine Awards seek to honour the wines that truly portray South Africa’s different wine growing areas. Its prize-giving ceremony this year was an exclusive function due to Covid regulations, held at Overture Restaurant in Stellenbosch last week.

Coming out tops from more than 240 entries representing diverse cultivars and wine styles were the Boplaas Touriga Nacional 2019 as variety champion; and, the Boplaas Cape Vintage Reserve Port 2004 as champion port.

The Boplaas Touriga Nacional 2019 was recently awarded as the best value red wine in South Africa by UK Master of Wine Tim Atkin in his SA Wine Report 2020.

The Boplaas Cape Vintage Reserve Port 2004 continues the Nel’s heritage of crafting the very finest Cape Ports utilising Portuguese varieties and traditional vinification methods, and remaining true to style in crafting wine that will offer decades of enjoyment.  The performance of the 2004 not only showcases this, but also re-affirms the ageability of the Boplaas ports.

Portuguese grape varieties thrive in the Calitzdorp region because they are hardier and well-adapted to warmer climates.  It is anticipated that they will play a bigger role as global warming increases. To this end, a potentially landmark vote has seen Touriga Nacional approved for Bordeaux and Bordeaux appellation wines as part of efforts by the industry in France to adjust to climate change.

The suitability of the Calitzdorp region for the Portuguese varieties was realised quite by chance and a fortunate accident or two.

The story began in the 1970’s, when Boplaas patriarch Oupa Danie Nel returned from a visit to the Swartland with his Chevy El Camino packed with bottles of Pinotage and Shiraz. His friends and neighbours needed no encouragement to make short work of the Shiraz, so it was decided this was a variety to plant.

Vines were sourced and planted.  Only later however was it discovered – partly by Carel, Oupa Danie’s son who is now Boplaas owner and cellar master, that something was amiss.  Carel was studying oenology at the University of Stellenbosch when it was revealed his father’s vines were Tinta Barocca and not the intended Shiraz.  A trip to Portugal followed and soon the Nels had befriended many of the Douro’s top port producers. Over decades they were exposed to fine fortified wines, acquiring the art of crafting them too.

These award-winning wines are available from the Boplaas cellar door in Calitzdorp and at the Boplaas Klipheuwel tasting room in Klein Brak River on the Garden Route; the Boplaas online shop at www.boplaas.co.za, as well as from discerning fine wine retailers nationally. Boplaas ships across South Africa, free of charge if a purchase totals more than R1 500 or 12 bottles.