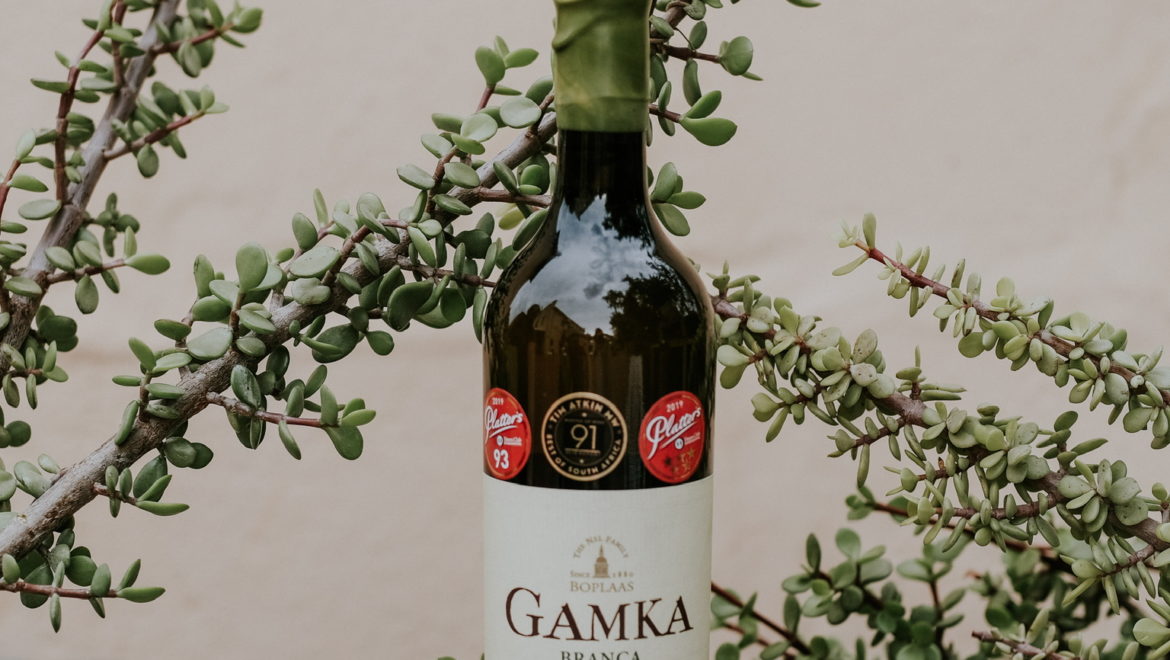 Boplaas Family Vineyards received five gold medals at this year’s Veritas Awards, placing the Calitzdorp winery and distillery among the national competition’s best-performing producers. The medals were for white wine, brandy and port, and selected from just 128 Golds awarded over the weekend.

The wine is a blend and includes the Portuguese variety, Verdelho – a recent addition to the Boplaas plantings, but one with a bright future. To this, was added cool climate Chardonnay and also Viognier, Grenache Blanc, Chenin blanc and Rousanne.  The wine was fermented in barrel and matured, realising aromas of citrus blossom, tangerine and lime marmalade, toasted oats, ripe pear, mild tannic grippiness and long saline finish.

The word “Gamka” in its name is inspired by the Khoisan word for lion and is a reference to the river that flows through the Calitzdorp Valley. In flood, the waters violently crash through the ravines and sound like the roar of these big cats.

Boplaas’s history of distilling spirits dates to 1880, when the first order of potstill brandy casks was sent to London. Boplaas became the first cellar to release an Estate Brandy in 1994, after the change in legislation in 1989.

This spirit was aged in a combination of old Limousin and port casks. The climatic conditions of the Klein Karoo concentrate flavours and created a brandy that brims with the character of ripe stone fruit, honey, herbal and floral notes. Every sip reveals its sublime, smooth mouth-feel and finish.

The brandy was double distilled in a century-old Santagans copper still.

The Boplaas Cape Vintage Reserve Ports 2017, 2015 and 2006 were produced from the Portuguese varieties Touriga Nacional, Tinta Barroca, Souzão and Touriga Franca. The grapes were hand-harvested at perfect ripeness and fermented in large traditional lagars – kuipe in Afrikaans. It was submitted to intense pigeage to extract optimal flavour, colour and tannins prior to fortification with wine spirits. The wines were then matured for 12 months in old, large-format French oak barrels.

The 2006 Boplaas Cape Vintage Reserve Port was entered in the competition’s Museum Class as it truly showcases how well Boplaas port ages.  This wine was the SA Champion Port at the SA National Young Wine Show in 2006. It received five stars in the Platter Wine Guide; five stars in Wine Magazine; was the Cape Port & Wine Challenge Museum Class winner in 2017; and, received 95 points from UK Master of Wine Tim Atkin.

Inky black in colour, the ports show a bouquet of crushed blackberries, tart cranberries and kirsch.  On the palate, the powerful fruit flavours merge with notes of liquorice, red fruits and hints of dark chocolate, and conclude in a dry finish.

The Portuguese variety Tinta Barocca made its way to Boplaas by pure chance and a fortunate accident or two. It was the 1970s and Boplaas patriarch, Oupa Daniel Nel, returned from a trip to the Swartland with his Chevy El Camino packed with Pinotage and Shiraz. However, it was later discovered in part by his son – current owner and cellar master Carel Nel, while studying Oenology at Stellenbosch University – that his father’s vines were indeed Tinta Barocca and not the desired Shiraz.  A trip to Portugal followed, where the Nels befriended many of the Douro’s top port producers and learnt, amongst others, the art of crafting fine fortifieds.